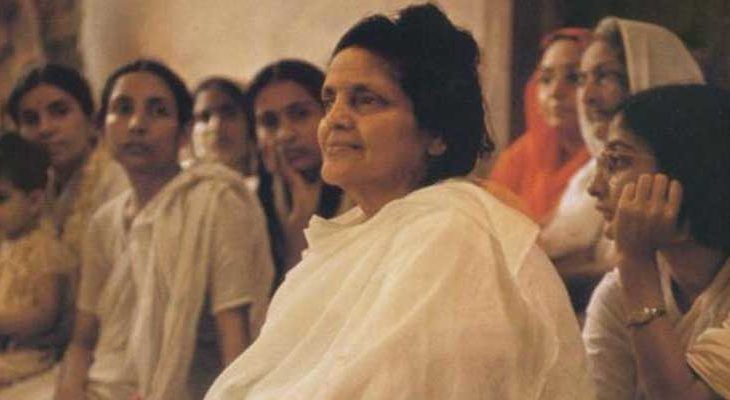 I’d like to share with you two bits of wisdom from one of my favorite saints, Anandamayi Ma.

For those of you who have been on our circuit together for years, you may have many pictures of her by now, because we usually hand out pictures of her. The reason I like these quotes is because they convey two different planes of consciousness, one of them in which she exists ‘in form’ and the other in which she’s ‘beyond form.’ In each of these, when she’s speaking, she’s speaking from that place at that moment, and it gives you a chance to hear, which is not so frequent, from a true ‘free’ being on different levels of consciousness.

So, when she is in the level of ‘form,’ she has millions of devotees and beings in her presence. For me, it was like being with a wild deer or fox or something like that, just an intimate, non-human connection, non-social. 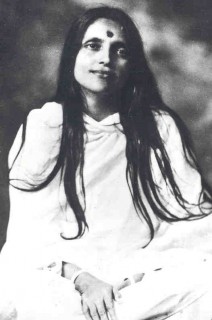 In this first quote, she is talking from dualism:

She says, “This body has lived with father, mother, husband, and all. This body has served the husband, so you may call it a wife. It has prepared dishes for all, so you may call it a cook. It has done all sorts of scrubbing and menial work, so you can call it a servant, but if you look at the thing from another standpoint, you will realize that this body has served none but God, for when I served my father, mother, husband, others, I simply considered them as other manifestations of the almighty, and served them as such. When I sat down to prepare food, I did in spirit of divine service. Hence, I was not quite worldly, though always engaged in household affairs. I had but one ideal to serve all as God, to do everything for the sake of God.”

So when she is in form, she is serving the formless through the forms. She’s in dualism, coming back.

Here’s the other quote. Once Paramahansa Yogananda, who is no slouch himself, asked Ma to tell him something of her life: “Father, there is little to tell. My consciousness has never associated itself with this temporary body. Before I came to this earth, Father, I was the same. I grew into womanhood, but still, I was the same. When the family in which I had been born made arrangements to have this body married, I was the same. And, Father, in front of you now, I am the same. Even afterwards, though the dance of creation changes around me in the hall of eternity, I shall be the same.”