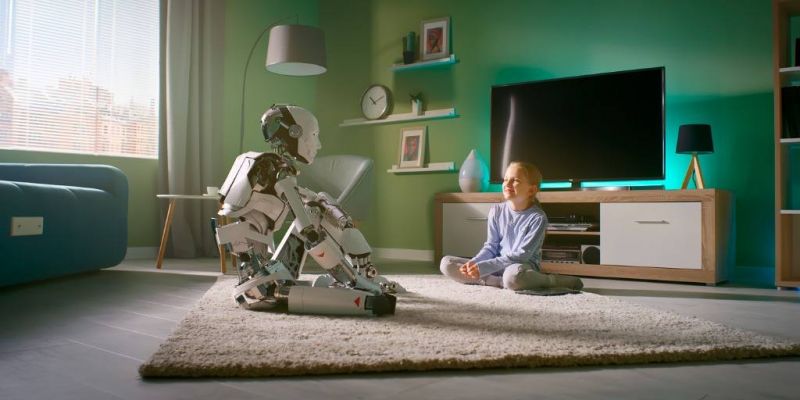 The whole thrust of the field of artificial intelligence (AI) is to make machines interact with us more like humans. In practical terms this involves building a computer or robotic device that can take over a human task and do it just as well or better. But how often do we ask the opposite question: Can AI make us more human?

This is an endlessly fascinating question once you go into it. The reason a machine isn’t human is that it has no interior life—it has no experience at all, while a person’s inner life is the source of everything human. Everything going on “in here” is overwhelming. We constantly think, feel, perceive, worry, dream, wish, remember, create, on and on. At this point, even the most optimistic AI proponent cannot foresee a computer or robot that does any of these things, so how can it make us more human?

Let’s start with physical health. There are already wearables that can give minute-by-minute biologic readouts, and these readouts are comparable to medical tests that would otherwise require a great deal more time to conduct and analyze by going to a doctor. Already you can use a wearable to monitor blood pressure, heart rate variability, blood sugar, respiration, and sleep. These are among the most important vital statistics you can know about yourself. So simple monitoring is clearly a plus in the AI column.

Next comes feedback. A wearable can beep to signal when you are stressed or have a spike in blood pressure and blood sugar, just to give a few examples. When you hear a beep, you can consciously improve your situation right away by, for example, getting away from the stressor and meditating to calm down. But a more advanced response is biofeedback, meaning that you allow the autonomic nervous system to make the correction for you. This approach holds great promise in promoting positive, life-affirming qualities of life. There are markers for feeling at your best and even joyful. If a wearable beeped when you reached such a peak moment in your day, such as an experience of love, creativity, compassion, joy or insight, your nervous system can be unconsciously trained to favor that state, returning to it more easily and correcting any vital sign that moved in the wrong direction.

There are many AI companies working in this direction. But even though stress is psychological as well as physical, the psychological side of AI is murky, for two reasons. First, a machine cannot feel an emotion; therefore, it doesn’t know what it means to be carried away by love, anger, jealousy, compassion, etc. Often these interior factors “do not computer.” Second, a machine cannot suddenly behave unpredictably, which is a human’s greatest strength and greatest weakness. The strength is known as creativity, which allows quantum leaps in solving problems and also gives us the great music and art in the world. The most obvious deficit is sudden outbursts of violence that disrupt normal life. Someone victimized in an abusive relationship is kept in fear by being unable to predict when the next outburst of violence will occur.

Yet the psychological side of AI holds unexpected promise. One can imagine a wearable that can warn you in advance that you are about to lose your temper (the physical signs aren’t difficult to measure). In our emotional life, emotions come to the surface after brimming beneath the surface. An AI device that could step in early enough could perform wonders, because there is a subtle tipping point before you consciously register that you are angry, anxious depressed, and so on. Catch the biological, pre-conscious indicators early enough, and you can consciously stop yourself from going over the edge. A good example on a grosser level is the relationship between sleep and depression. Someone who is subject to bouts of chronic depression can use poor sleep as a reliable indicator that a round of depression is on the horizon. It is much easier to manage sleep than it is to manage depression once it has started.

We’ve moved from the physical to the psychological, and now we are on the ultimate frontier of well-being: awareness. You cannot change what you aren’t aware of. The fact that a wearable could beep just before you lose your temper gives your awareness an opening for a conscious choice. It seems odd at first that an AI device with zero awareness can make you more aware, but anger management is one example. Let’s go a step further. Decades ago, software programs were written to mimic the typical things a psychotherapist says (e.g., How are you feeling right now? When did you start feeling depressed? How do you feel about how your family treats you?).

Users of these programs started to report improvements in their psychological state comparable to visiting a real therapist. Partly this is because they got a chance to vent without fear or judgement; partly the software gave the illusion that they were being listened to. Yet one can imagine a more sophisticated program that used nuanced feedback instead of rote responses. Already such a program exists in suicide prevention. A caller with suicidal thoughts can text message with emotional AI bot while in the background the controllers are able to monitor the seriousness of the exchange. If a suicide attempt seems immanent a therapist is brought on the line for human contact.

Going deeper, you might never expect that an AI device could make you more spiritual. But thanks to some significant research into transpersonal experiences, the kind most people would call spiritual (for example, feeling blissful, being untroubled by emotional drama, being aware of expanding beyond the confines of the physical body), there are at least twenty markers for spiritual growth. These do not involve religious beliefs but are evidence of the mind’s ability to transcend everyday mental activity.

We do this naturally in moments of beauty, love, awe, wonder, and inspiration, yet as noticeable as these experiences are, we do not weave them together. Once they ae woven together, the signs of higher consciousness begin to appear and form a pattern. At the simplest level a software program could evaluate your state of awareness by using an index of higher consciousness. The next step would be feedback, where the program assimilates your answers and weighs them dynamically to tell you what trend you are following.

At least a few of these advances in AI should surprise you. Becoming more human thanks to a machine seems to me to be the most exciting horizon that AI can cross. Turning to AI as your personal health advisor, or life coach isn’t at all far-fetched. The prospect could change the face of humanity, and the odds are that once we move in that direction, the trend will prove unstoppable.