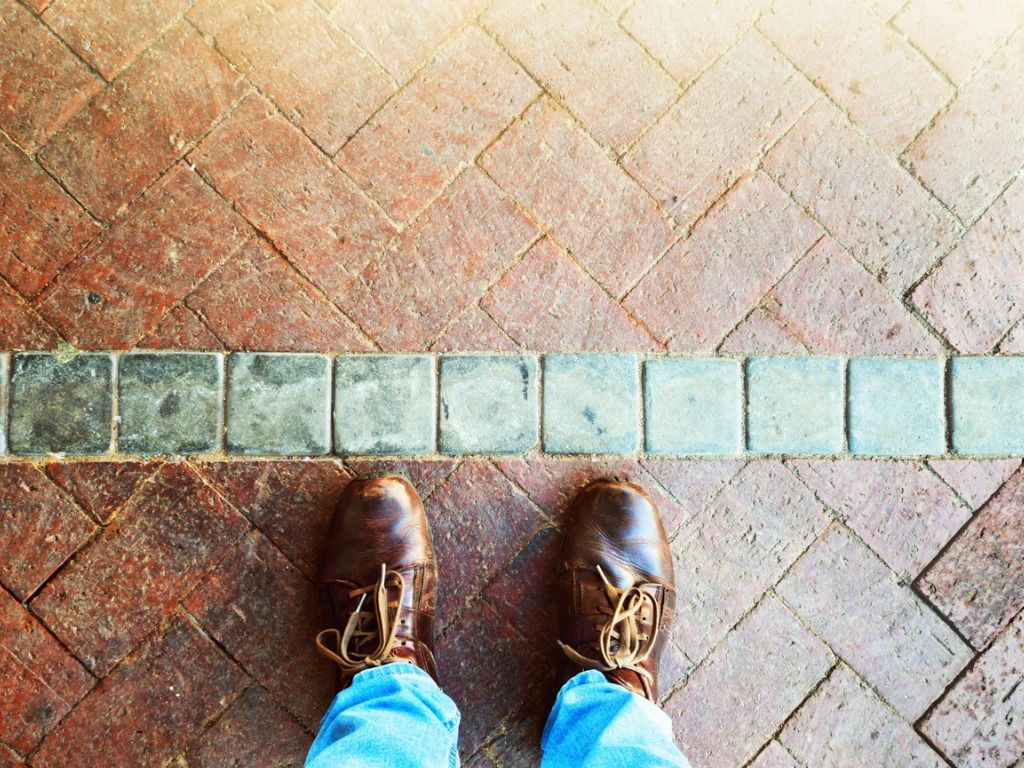 Leonardo di Caprio has it. Often, he feels the urge to walk through doorways multiple times. So does Daniel Radcliffe. It used to take him as long as five minutes or more to turn off a light. Then there’s Charlize Theron who claimed that she would lose sleep thinking about other people’s disorganized cabinets. And of course, there’s Howie Mandel who refuses to shake hands with people he meets. This is what obsessive-compulsive disorder — known simply as OCD — looks like for different people.

“You have OCD!,” exclaimed my friend back in college. She was a Psychology major and we were talking about something I don’t even remember. I told her that the first thing I did when I got home from school was wash my hands. I told her that I did this, too, after I’ve read the papers. “What’s wrong with washing your hands?” I replied, “Don’t you know how dirty public transportation is? And how can you not wash your hands after touching a newspaper? Your fingers turn black from the ink!” I didn’t believe her ‘diagnosis’ of my apparent disorder and I could honestly say I didn’t suffer from OCD — until much later.

There are no recent statistics on OCD sufferers but according to a 1997 National Center for Biotechnology Information report, 2% of the global population suffered from it at that time. In the U.S., it affects about 1% of Americans. A Psychology Today article explains that OCD manifests in different ways, among them washing, cleaning, repeating, and orderliness.

BeyondOCD.org states, “Although it has been established that OCD has a neurobiological basis, research has been unable to point to any definitive cause or causes of OCD.” 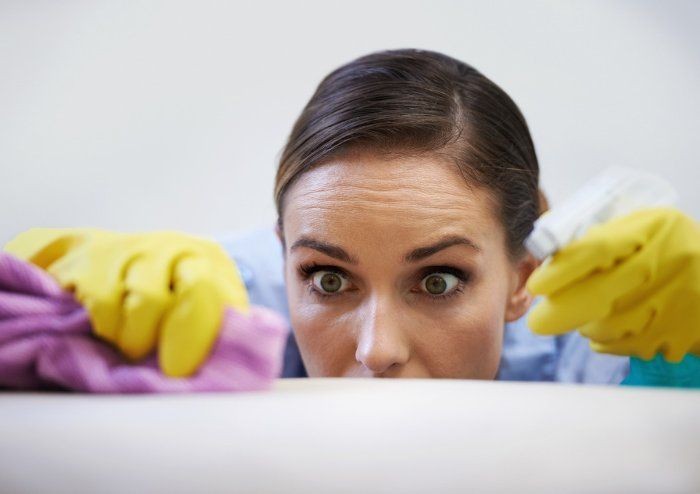 For me, though, I know when things happen out of my control, OCD rears its ugly head. I become a scrubaholic. I want everything to be clean and I get upset when someone messes up my sparkling clean stainless-steel sink and clutter-free kitchen countertop.

Sure, there were a few other things, like clicking a door lock three times to make sure it’s really locked. If I click it three times, then I know for sure it’s locked. 1-lock, 2-unlock, 3-lock. I remember the look on my mother-in-law’s face when she saw me do this. “Do you always do that?” she asked. Oh, right. Normal people don’t do that. Or opening the door of a toilet (other than my own) with either my elbows or with tissues in my hand. But I swear, it’s not that bad. I’m no Monica Geller or Howard Hughes, I promise.

The first time I noticed that I was being obsessive compulsive was just before I was hit by depression. My life had just turned upside down and was starting a brand-new life with a new person in a different country. I felt like I had lost control of my own life and felt completely helpless.

Our house was the only thing I could control, so when I started cleaning, I went at it like a maniac. I wouldn’t stop until I was either too tired to go on, or became pull-my-hair-out frustrated for not being able to get something spotless.

When things start to look up and going more in the direction that I want, my OCD seems to recede by itself. My need for incessant cleaning and scrubbing goes away. So do my fear of dirty toilets and the need to have color-matched clothespins. I become ‘normal’ again and move on happily with my life.

Several years ago, it started again, when my career collapsed. My OCD flared up, needing to make myself feel like I am in control of something in my seemingly upside-down life.

Put the sponge down!

One day, as I was driving myself crazy over a stain on the floor that I couldn’t get out, it hit me. What are you doing? You’ve gone absolutely crazy! While I had always been aware when I start to OCD the hell out of my house, I didn’t really pay too much attention to it or got worried about it because it would usually just go away by itself when things start to improve in my life.

But this time, I said to myself, “You have got to get a handle on this thing.” Right then and there, I dropped the kitchen sponge that had gone too thin and tattered from the torturous scrubbing I’ve put it through.

The thing is, I don’t even like cleaning. So, I asked myself, “Why are you doing this? You’re spending hours of your day doing something you don’t even like!” My OCD-driven cleanfest would usually take four hours, give or take (although it’s more give than take). While that is probably not so bad to spend on cleaning, I realized that the driving force behind it was what’s making it an exhausting way of life.

I learned that the fuel that lights this fire was the fear of what other people would say — of being judged — if my house isn’t perfect. I was sure that people who come to my house would see that tiny little spot in the corner of the powder room floor obscured by the toilet paper holder and judge me for it.

I lost control of my life and I sure wasn’t going to let them criticize me further for not being in control of my house. I didn’t want to give them any reason to criticize me more than they probably already do given my ‘imperfect life.’

My OCD tends to get stirred up when people are coming over to our house. It sends my head into a tailspin. This is a time when I would amp up my meditation time. I was determined to do something about it so I forced myself to become present with my thoughts and be aware of my actions and ask myself why I wanted to clean something. Do I want to do this because I really want to or is it because I’m afraid of what other people would say if I don’t?

As I look at the dirty sliding glass door and think, “Ugh, that’s disgusting. What would people think of me if they see that?” I immediately follow it with my new mantra, “I don’t give a s***. If they don’t like what they see, they can get the f*** out of my house.” I had to use strong language on myself because otherwise, I would negotiate my way out of it.

I forced myself specifically not to clean something if I feel the OCD urge to do it. I trained myself to ignore the things that I think I should clean because people are coming over. It certainly doesn’t help when your father-in-law keeps pointing these things out whenever he’s around. But I vowed to myself that I will stop being polite and say something to put him, and others who do the same, in their place. The last time he pointed out something, I replied, “So what? I’m not going to die from a cobweb in the corner of my ceiling. And if I die tomorrow, that is something that I won’t regret not doing. There are more important things in life.” He never said anything since.

So now, whenever I feel the need to wipe down the sink or mop that little water spot on the bathroom floor, I tell myself that I need to do something else — like writing or drawing or playing the piano. I nip it in the bud and redirect my attention to something else that would hold my interest — something that I enjoy doing instead of picking up a sponge.

I also decided to tackle cleaning chores a little at a time and apply the 80% rule that I’ve recently learned to use for everything else that I do now. As a recovering perfectionist, I trained myself to be okay with things being 80% good. This helps me move on instead of getting stuck in aiming for perfection that leads to all sorts of negative thoughts and feelings.

The challenging truth is, there are Martha Stewarts and Bree van der Kamps in this world, and I have them as neighbors, too—another one of the Universe’s not-so-funny jokes. But I understood that this is giving me the opportunity to learn how to respond to triggers in ways that would help me learn the lesson that was intended for me so I could grow out of my fear of being judged by others.

In so many ways, this has also taught me not to look at others through the lens of judgement but through understanding of their own life lessons. And in even bigger ways, it has taught me not judge myself. At the end of the day, my OCD is not about the mess. It’s not about the cleaning. It’s about feeling safe within myself that even with my ‘imperfect’ life, everything is just perfect as it is.

Disclaimer: This writer it not a medical or healthcare professional so this article is not intended as a professional advice. This is merely an account of the writer’s personal experience. If you are suffering from obsessive-compulsive disorder, please seek professional help.

6 Reasons to Try a Low-Sugar Diet

Your Health Needs a New Map: Here It Is

4 Household Items You Should Replace Regularly for Better Health