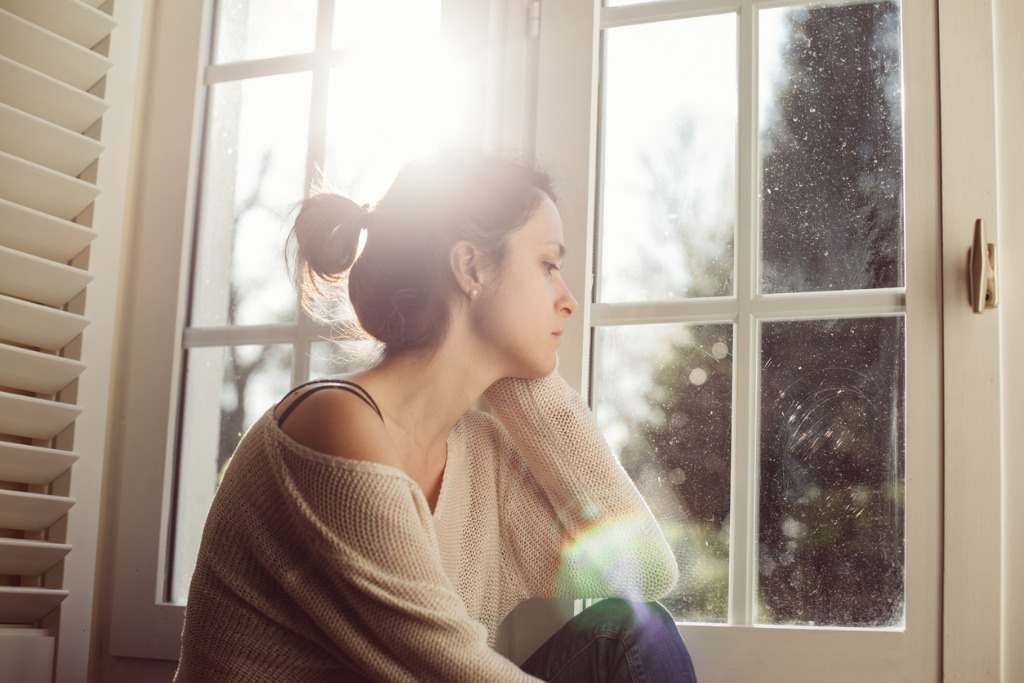 When all of those changes were going on, I was in survival mode. I was running on pure adrenalin, like a person who walks into a house on fire to save their cat or lifts a car to save someone pinned under it. I was swimming through a storm of personal disasters and emotional trauma, one after the other, and the only thing that I could do was to keep my head above water in order to survive, trying to swim to shore. There was no time to fear or be sad or ask for help. Everything that’s left was a sense to survive. And when the dust finally settled, I was confronted with the aftermath of the hurricane that blew over my life.

And in those moments of calm, it hit me all at once. The shadows that trailed the emotional trauma of it all swallowed me whole. Add to that fact that the shore to which I swam was a totally new territory, with no family or friends to which I could turn. Living in a new country made even the simplest things very difficult—like grocery shopping where you can’t ask where to find ginger because you haven’t quite learned the word gember, or asking for your neighbor’s help because you don’t know how to explain that the power went out and ask him if he could take a look at the fuse box. You don’t realize how the inability to do these little things knock down your confidence until you’re in the middle of it all.

In a nutshell, I was grieving the death of the life that I used to know and at the same time, feeling afraid and insecure in the uncharted waters I chose to tread this time around. I felt like I was no longer in control of my life. It all became too much and I got sucked into the deep, dark vortex of depression.

Reluctantly, I went to see the doctor. This is a time when I knew little about depression and antidepressants and yet there I was, sitting across a physician writing me a prescription for a drug that’s supposed to “fix” me. Honestly, I did not resist because I welcomed the relief that it could offer me from this awful, horrible state of being that I wouldn’t wish on my worst enemy (not that I have any). I wanted to feel better. And feel better, I did.

But after five or six months, something inside of me made me say to myself, “I got to stop (taking this drug). This is not right.” So, I did. But it took longer to get off the meds than it took to make me feel better, but I did it. Do I still get depressed since then? Sure, I do. Who doesn’t? But it only happens occasionally and very briefly because I’ve learned to look at it differently.

In retrospect, I understand that my depression back then was allowing me to go through the pain and the grief of what went on in my life. Had I simply allowed myself to go through the process, in time it would all have passed, much like winter turns effortlessly into spring. But much like many people, I wanted an instant cure—a quick fix—in order for me to function. I didn’t give myself enough time to rest and digest all that I have just experienced the way our “system” is naturally meant to do.

Taking the meds was like putting my internal GPS on mute. It’s like being on autopilot. I just kept on going even if it was telling me to take a right turn here and a left turn there. I was reacting to life instead of taking guided actions. It was guiding me every step of the way but I couldn’t hear it. The meds numbed me from the emotions that I would rather not feel, the thoughts that I would rather not have, and the fears that I would rather not face. Luckily, the higher version of me knew better and it snapped me out of it. No more quick fix. It’s like it was telling me, “You’ve had your time to mourn, now it’s time to move on, but you have to take your feelings with you.”

I’ve learned to look at depression—or little dips, as I prefer to call them, although they’re not so ‘little’ at times—as internal signals from my inner guidance. We’ve been taught in our global culture to use our head instead of our hearts and so many people have learned to anesthetize those feelings that “get in the way of clear thinking.” As Albert Einstein has been quoted to say, “The intuitive mind is a sacred gift and the rational mind is a faithful servant. We have created a society that honors the servant and has forgotten the gift.” For me, depression is a reminder to pay attention to that gift. It is an internal message that says we’re unhappy because we are not on the right track, or we’re not being our true selves, or it’s time to re-assess our situation, or perhaps move on to a new life.

Seventeen years ago, my depression was telling me that although I have every right to grieve the loss of the life that I used to have, I also needed to—at a certain point—let go of that grief and make room for other “feelings” in my heart so that it could guide me the way they’re meant to. And so, when I stopped medicating myself, I was able to access that intuitive guidance that was telling me that my life turned upside down so that I could start writing the next chapters of my life; to get my act together and start seeing what’s in front of me and start rebuilding my life now instead of wallowing in the murky swamp that was my past.

These days, whenever I get those little dips, I allow myself to feel whatever it is trying to make me feel. Once I acknowledge it, my inner guidance then kicks in and points me in the direction I need to go. I ask myself, “Why am I depressed? What is this telling me? What is it that should belong to my past that I couldn’t let go? What is it that is making me feel unhappy?” Sometimes the answer doesn’t come quickly, but most of the times, it does. I find that if I truly make the effort to listen instead of drowning it out by overthinking or looking to instant gratification—like binging on my favorite sitcom or emptying a bag of chips—the answers come effortlessly and clearly.

It took time but I’ve learned to trust this guidance almost exclusively instead of the external sources. I’ve learned a lot from many awakened beings and spiritual teachers, but at the end of the day, I still trust my own intuitive guidance because no one knows me and my life better than I do. And to borrow a line from William Ernest Henley’s poem Invictus, “I am the master of my fate; I am the captain of my soul.”

As such, I am fully equipped with the navigational tools that I need to sail through life. All I need to do is to trust and use them and I will never be lost again.

Disclaimer: This writer it not a medical or healthcare professional so this article is not intended as a professional advice. This is merely on the account of the writer’s personal journey. If you are suffering from clinical depression, please seek medical advice.