United we stand; divided we are merely a distraction 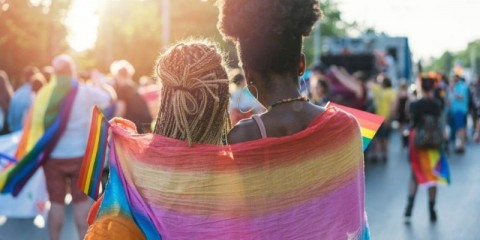 I find it interesting that when this quote first came to me a few years ago I thought of it relative to organizations, communities, societies or families. As time went on, I realized this statement is most significant when it comes to my life experiences as a gay person.

United I stand, divided I am merely a distraction.

I was divided as a teenager when I realized that I was much more drawn to women rather than men. I had feelings for a young woman a little older than me yet the church said I was going to hell. My grandmother actually mourned when I was almost 14 that she would not see me in heaven. Here I was without even a driver’s permit and my grandmother is telling her former favorite granddaughter that she would not see me in heaven. A part of me died a little and felt divided.

The deeper truth of the matter was when I was 10 years old, my mother was accused of having an affair. We lived in a small southern town and to this day, I still do not know if it was true or an accusation. What is true is in the 60’s the South was just like they featured  in the famous film ‘Prince of Tides’. We put things under a rug and don’t look back. We don’t talk about anything that makes us uncomfortable. We medicated before we meditated. We have so many untold secrets and some of the secrets keep us up at night.  When this accusation happened involving my mom, I was sent up North to be with family and my mom was sent to a mental hospital and was gone for a long time. They used those barbaric shock treatments on her and she was never the same. She returned with very little of her memory in place and has experienced physical difficulties due to those methods. We never spoke of these events again. I certainly tried to but no one would engage.

Needless to say, when my father walked in on me at 13 ½  and my teenager more than a friend lover, my parents took me to the Mental Health Clinic. My father was not going to have a homosexual daughter. ( we didn’t really use the word gay then) That day was a defining moment in my life for I was not going to be sent away to some hospital and put in a straight jacket. However, I can clearly see now that I did get a straight jacket placed upon me metaphorically speaking and I would wear it unconsciously for many years.

I was forbidden to ever see my teenager more than a friend first love again and I went from being the family favorite to the one who had whispers around her name. The hurt of abandonment and betrayal was often unbearable. I found a new way, I drank the feelings away and became a full blown alcoholic for the next 15 years.