Lessons from a willow tree: Why nature is the best teacher of life 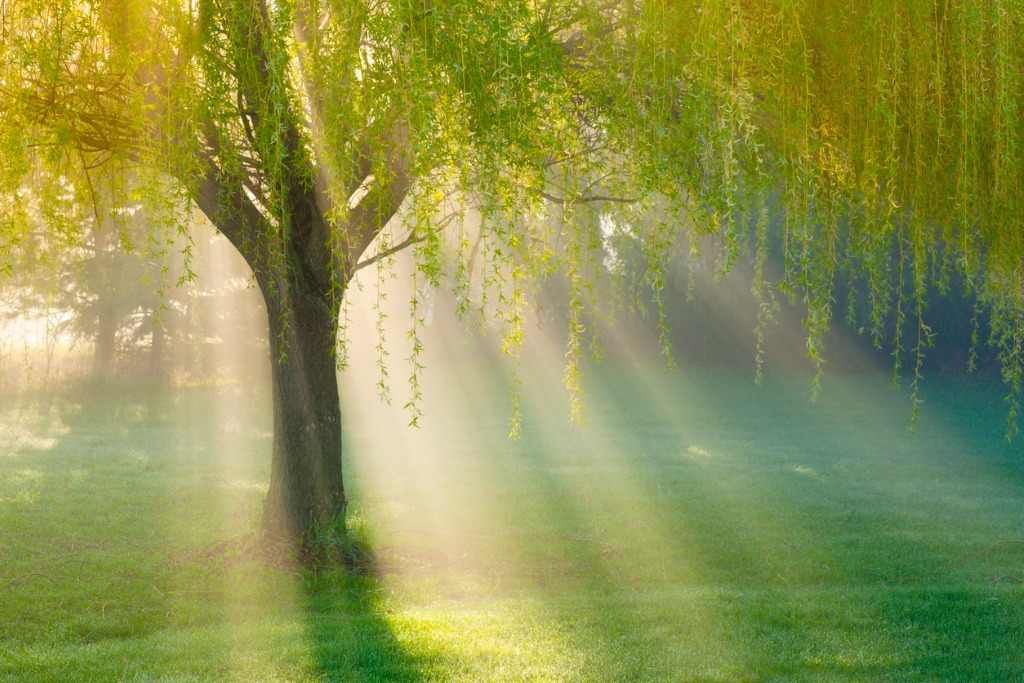 Lessons from a willow tree: Why nature is the best teacher of life

If you embark on a journey of personal growth or spiritual development, at some point, you’d want to have a teacher to guide you through your that labyrinth. Some people hire coaches, some look for mentors, and there are those who even travel to places like India or Tibet to seek counsel from yogis, gurus and monks. But many people believe the famous Buddha-associated quote, “When the student is ready, the teacher will appear.” In my case, that teacher came—but not in the form that I expected.

“That one!” I exclaimed to the man showing us plants and trees. I was pointing to a fully-grown six-foot potted tree standing in the corner of his greenhouse. We had just moved to a new house half a year prior and we were looking for new plants and small trees for our small backyard. I had a list of what I wanted to get so I don’t get swept up by the beauty of all the plants surrounding me and end up buying impulsively.

But this one was different. How this specific tree—which looked neglected and out of place like a mangy dog among pedigrees—caught my attention. I didn’t even know what kind of tree it was. And I didn’t even occur to me to ask. Even with its sparse leaves and lack of growth in the middle of summer, I felt strongly drawn to it and carried a sense of pride in taking it home. I knew exactly where to put it in our backyard.

Autumn rolled in and it lost whatever few leaves it had. Winter came and went and nature gave its signs for early spring. The little tree started showing some new growth. I can’t remember when it was exactly, but I heard my husband say before that it’s a willow. And then it hit me. Willows need to be cut back every year. I did a little snooping around and found out that this tree is actually called Japanese or Dappled Willow. Given its ‘condition,’ drastic pruning back is necessary to encourage more vigorous growth, more colorful foliage and obtain redness of the branches in the winter. So, it needs to be cut back.

As I stood in front of it with pruning shears in my hand, I hesitated. There’s already new growth coming out of the twigs. Wouldn’t pruning hurt it? What if it doesn’t grow back? With a tiny bit of terror in my heart, I started to cut down the twigs with only the intention of shaping the whole thing. But as I was cutting it, it was as if I was being eased into the process, being encouraged to cut and then cut some more. Finally, as if guided by the invisible hands of nature, I took the lopper out of the shed and started cutting down the thicker branches until there was nothing left but a few stumps sticking out of the top of the trunk. My husband walked out from the house, gasped and said, “What have you done?”

I felt a sense of panic within me. Oh, my god. What have I done?!? But I pretended to be calm and said to him, “The plant experts say to cut the branches back down to 10 centimeters. So that’s what I did. It will be good for it.” I wasn’t just trying to convince him. I was trying to convince myself that I did a good thing. “We see it all the time. Those big willow trees out there lining the roads. They cut them back this way, right?” The look on his face was of worry. I was sure mine looked that way, too, because I was really worried. But the deed was done. There was nothing else to do but wait.

The next day, I went to check how my little willow was doing. I stood in front of it—a skinny trunk with a few stumpy branches sticking out of the top—saying under my breath, “Please be okay. Please be okay.” As if my presence would help it all grow back—that I could make it all grow back by saying those magic words. Then I’d walk back into the house. I did this for four days, each time walking away afraid that I might have killed the poor tree. But the truth is, if I was able to quiet my monkey mind, I knew that it would be okay.

On the fifth day, I walked up to the willow prepared to worry like I had been doing for the past few days. But to my delight, I saw that little red buds had come out of the branches. At that moment, I knew that my brave little willow is going to be okay. In the coming weeks, I watched it explode into a full bush of green leaves and pink flowers. By summer, its graceful red twiggy branches had grown twice the former size that had my husband saying, “We have to trim it a bit.”

From that little experience, my beautiful willow became my teacher. Like many people, often, I have trouble letting go. Whether it’s that pretty dress I haven’t worn in years, an old memory that brings nothing but pain, a hurt feeling from what someone had said to me, or a friendship that shares nothing but yearly dinners, letting go doesn’t come easy.

My dappled willow taught me that this refusal to let go of something even though it no longer serves us is caused by one thing and one thing only—the fear of the unknown. We refuse to leave our comfort zone, even if they are not longer comfortable, because we do not know what will happen if we did. In the same way, I feared cutting down my willow’s “mangy” stems because I didn’t have faith that they will all grow back and that I might actually kill it if I did.

But it showed me the opposite. When we let go of something that has already served its purpose in our lives, we make room for—quite literally—new growth. And it’s not just new growth, but lush, abundant, stunning growth that when you look back, you’d wonder why you were so afraid back then.

From then on, nature became my guru of sorts. Whenever I am having a hard time letting go, I think of my little willow tree. Whenever I am not sure about how I am dealing with things and my life in general, I ask myself, “How does mother nature do it?”

Nature just is. It doesn’t force any outcome. It doesn’t live with an agenda. It doesn’t work on deadlines. As Mark Nepo said in his book The Book of Awakening, “The flower doesn’t dream of the bee. It just blossoms and the bee comes.”

The maple tree doesn’t refuse to lose its leaves when autumn comes—it knows when to let go. Daffodils don’t bloom just because it’s the first day of spring nor will it stop itself from blossoming earlier if the conditions are right. The lilac will not be jealous of the Magnolia tree or compete with it or want to be it—it is happy to be itself. Tulips will not stop withering after two weeks even if you wish it wouldn’t—it listens only to itself and focuses on its own life.

Each and every element of nature knows their role in the grand system that sustains them. The bees, for example, play a great role in the ecosystem—sustaining life on the planet through cross-pollination. The Sahara Desert transforms the Amazon through its sandstorms. A giant waterfall beneath the oceans of Antartica provides food for the sea creatures near the equator. And they do it all naturally ‘behind the scenes,’ without looking for recognition or accolades.

Nature goes with the Flow—with that divine cosmic intelligence that connects us all. It doesn’t resist it. It doesn’t force any outcome. It knows how to adapt and evolve with the changing circumstances effortlessly. It doesn’t wish to be something else and it doesn’t ask for more. It doesn’t think about what it needs to do. It doesn’t stress or worry. It just knows how to be. It doesn’t judge, fear, hate, or exclude. It just is. It is living wisdom in its purest form. It shows us the way without uttering a word. That’s why it’s the best teacher in this school we call life.

The Great Secret Hidden Within Each Moment

How To Live The Mystery Of Life

How to Live with No Regrets