The Spiritual Alternative to Tolerance 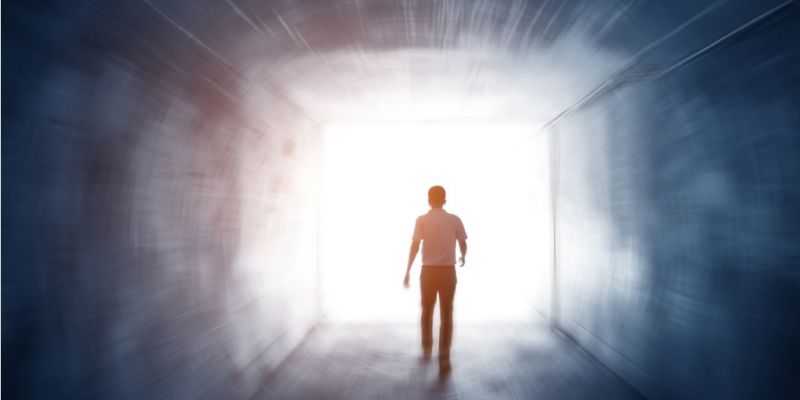 The Divine Intelligence didn't create anything that it fears or hates
Deep spiritual work reveals the truth that hellish things on earth manifest as they do because their dark cause dwells hidden somewhere in us. We are about to look into this interior abyss and shine into its unseen corners a beautiful light of understanding. We will illuminate the center of the earth where dark forces are always celebrating some victory over unconscious human beings.

Imagine the chief devil calling together every possible evil entity that is in range of his magnetic voice and saying, "How can we interfere up there? What can we do to further deceive human beings? We must keep them in the dark so they can't see the Light that wants to rescue them. I want something so evil, so sinister, that no one will know what happened. Who's got it?"  And the flames of all the little imps dim a little bit because they're afraid; but two days later, they all come back with a few ideas, although nothing spectacular. Then one tiny imp hops on the shoulder of the devil and whispers something in his ear. Great flames shoot out of the devil and sear the little imp who cries out "Thank you!" Then the devil exclaims, "Ah! I have the plan in hand!"  He looks around at all of his lieutenants, each of whom is assigned to certain individuals on earth, and gleefully instructs them: "I want you to go up there and spread the idea of tolerance.' Go tell the stupid human beings up there that they should start teaching the idea that the tolerance of others is the same as the love of them. Oh yes! This is my best deception yet! It's a real killer!"

We have had sown into our minds a certain social contrivance, a convenient mechanical reaction called "tolerating" people who do not meet our approval. We "tolerate" those who don't please us or who rub us the wrong way. And we believe that our ability to tolerate another individual is the same as learning to live in harmony with him or her. Nothing could be farther from the truth!  It is through just such a deception that human beings have almost lost the possibility of being able to see how true Love is being choked out of us and off this planet. As surely as there are objects that choke the throat, there is that which chokes the soul. Now let's examine this idea and learn what it will take to remove this unnatural obstruction.

We must begin by recognizing the following truth: All forms of tolerance have their root in one form or another of resistance, a fact that should make the next truth obvious to us: We cannot resist something, be negative towards it, and be in a loving relationship with it at the same time.  Here's what this means practically speaking: When we unconsciously think "I will tolerate' this person by putting up with his dark manifestation, but only because I don't want anyone to see just how negative he makes me" -- then what has happened to us? We come to believe that we are "loving" because we repress our wish to lash out at whoever disturbs us.  Government and social institutions heavily promote this idea of "tolerance" to maintain the illusion of a progressive, evolving society; but to love one another has absolutely nothing whatsoever to do with harboring resistance while calling it acceptance. Resistance isolates, separates, and chokes. Love embraces, welcomes, and breathes freely. But there is more yet to see here, if we will.

The whole notion of this order of tolerance is rooted in the idea of superiority, as only a superior person tolerates an inferior human being. When we are with someone, and we must "tolerate" him or her, we are in a state of secret self-love that keeps itself in place by having that which it quietly denigrates. But this unconscious state of self is only half the limitation.  Unconscious self-superiority keeps itself in place through a process of resisting what it imagines it isn't like, but by the fact of the negative reaction proves its unseen likeness. Shakespeare said, "Methinks thou dost protest too much," because he was pointing out that what we most strongly dislike in another is what we unconsciously recognize in ourselves.

The first step in harmonious relationships is simple: We need only realize the truth that there is no one whom we are not like in some way, even if we don't actively express this quality. The deception is that we're sure we're unlike everyone except for those who match the images we have of ourselves. And so it goes that we live from -- see our lives through the eyes of -- a kind of "self" that is in a perpetual state of resisting anyone seen as being "not like me." But Love cannot grow where resistance rules. We're not created to resist anything; we are created to grow through everything. Resistance to life kills the process of spiritual development. When we resist what life would show us about ourselves, we effectively close the door on the Light that wants to help transform us by showing us what we don't know we harbor in our soul.

The human being is created to develop in the "likeness" of that marvelous intelligence that made us. This divine intelligence didn't create anything that it fears or hates. It's a ridiculous thought to walk around and believe (as we all do because of the strong sense of self that it produces) that another person is our enemy simply because we feel enmity for him or her. Now don't be mistaken, there are plenty of unpleasant people; our world is packed with them! But, given the negative effect of resenting others, and the fact that for now all we know to do towards those who disturb us is to resist them, could it be that when it comes to our human relationships we have been blinded to one of the main reasons for them? The answer is "yes."  Just as the wind moves through a tree and carries its pollen to the blossoms of another tree, our relationships are intended to be pollinations. They are intended to act as conditions for us that create the possibility of understanding that, in reality, there is no such thing as this separate self that lives only to create what it must then tolerate!  This idea of tolerating human beings can't possibly be the seed of something celestial. This part of us that has become a master of tolerating those whom it can't stand has come to be as strong and prevalent as it is because of how superior it makes us feel. This unconscious self-righteousness is not an act of love, but a form of hatred; it is a weakness.

We need a new intention in all of our relationships, something like this: I will not suffer you; I will suffer us. I will not cast you out as being something inferior to myself.  I will not do that because I can't recognize anything in you as being an inferior condition unless I have it in myself.  Our work, if we're willing, is to catch that surging separation called "you are different from me." And then, in that same moment, to apply our new understanding that cancels this unconscious act of resistance. Instead, we embrace the realization that "you" and "I" are both exposed in this God-given moment that is meant for the purpose of transcending ourselves.  Remember that "tolerance" is a lie because it produces a "me" that is always apart from what I am tolerating.

There cannot be Love where there is separation. Learn to watch this low-level self that is trying to destroy the possibility of Love awakening in us. Risk leaving yourself open by refusing to identify with the parts of yourself that would have you believe that resisting Life can lead to being embraced by it. Do the inner work it takes to make these ideas personally meaningful and you will understand the greatest secret on earth: everyone on it has a gift just for you -- if you will only take it.
Facebook   Twitter   LinkedIn   Pinterest   Reddit
Tags:
love Conscious relationships beings something
The Most Important Questions To Ask A Psychic (Acc...
Try A Little Tenderness