What You Eat Can Impact Climate Change! See 9 Foods That Harm the Planet and 11 Foods That Can Help Save It 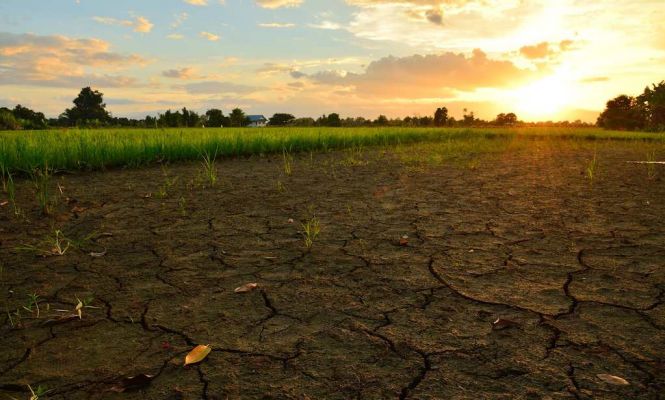 If there’s one common problem that every inhabitant of the Earth is currently facing, it’s climate change.

Those two words sound innocent enough: “climate change.” And maybe that’s part of the problem; with everything that’s going on right now, thinking about the climate changing in 10 or 50 or 80 years just isn’t that much of a priority for most of us.

But that’s got to change. Because really, what’s happening isn’t just climate “change”, it’s climate chaos. And as crazy as things have gotten, unless we change course, we are barely seeing the tip of the iceberg of what’s coming.

But already, climate chaos is beginning to unfold, and it’s not looking good.

With unprecedented heat waves in unlikely places, like Seattle, Washington; Portland, Oregon; and even British Columbia; unprecedented flooding in Germany, Belgium, and China; unprecedented droughts and wildfires in the Western US and around the globe; the first rainfall on the peak of Greenland’s ice sheet for the first time in literally ever — and a truly alarming new scientific report on the now-unavoidable impact of global warming on our world, we can’t keep acting as if this isn’t an urgent matter of life or death.

So here’s the latest update on the crisis — and on one of the most important things we can do to turn it around (that almost nobody is talking about!).

The Current State of Climate Chaos

Earth’s temperature has risen about 1.4 degrees Fahrenheit since 1880, with about two-thirds of that warming occurring since 1975. What’s causing this rise in temperature? Well, we are.

If we don’t collectively start making major changes now, scientists predict the path we’re on will have dire consequences for all life on Earth.

The primary greenhouse gases are carbon dioxide, methane, and nitrous oxide. They become trapped in the atmosphere and prevent heat from leaving the planet — causing the planet to overheat.

Storms are becoming more powerful, frequent, and unpredictable. Agricultural patterns are being overturned, with massive droughts in some places, and floods in others, leading to widespread crop failures.

Insect populations are falling, threatening entire ecosystems with collapse. Without pollinators, crops will fail. Other crops — including key global staples — are threatened by pests who move in along with warmer temperatures. And as polar ice caps melt, coastal communities, including entire nations, are being threatened by rising ocean levels and saltwater encroachment.

In short: Sea levels are rising. Ecosystems are being destroyed. Species are going extinct. And if we don’t change course, we may soon look back on the 2020s as the “good ol’ days.”

According to a new United Nations commissioned scientific report by the Intergovernmental Panel on Climate Change (IPCC), we’ve lost the chance to reverse this overheating. Under no foreseeable circumstances will we be able to prevent the planet’s average temperature from rising another 2.7 degrees F over the next 30 years. The pollution blanket that our industrial and agricultural sectors and our western lifestyles have woven is here to stay for decades, even if we were to miraculously stop polluting tomorrow.

As a result, leading-edge scientists project that there could be more than 1.4 billion environmental refugees by 2060.

The most likely outcomes, according to the IPCC summary for policymakers, include “increases in the frequency and intensity of hot extremes, marine heatwaves, and heavy precipitation, agricultural and ecological droughts in some regions, and proportion of intense tropical cyclones,” as well as more severe floods and droughts. And these changes will be “irreversible for centuries to millennia.”

The report shares “unequivocal” evidence that, as most scientists have been arguing for years, human activities are the biggest driver of our warming atmosphere.

But what can we do?

You Can Have an Impact on Climate Change 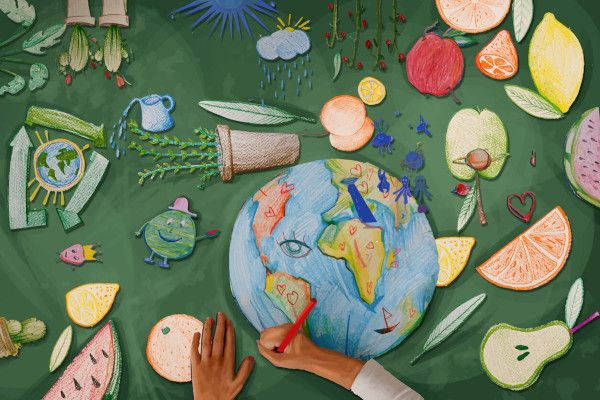 The problem can seem so daunting, and our individual power can feel so limited. Most of us don’t want to stop driving our cars, heating our homes, or buying the manufactured goods that keep us alive and comfortable.

Do we have to throw up our hands and hope that technology will save us? Or that the world’s energy companies will decide to stop drilling for oil?

The good news is, we all share one thing that can have a significant impact on climate change: the food we eat.

By making small adjustments to your daily food choices, you can help counteract the biggest environmental threats we’re facing today.

You have the power to help save the planet — starting with what’s on your plate. It’s not the whole story, but you can take a real bite out of the problem.

Food and Climate Change Facts You Need to Know

You’ve heard that carpooling and buying more efficient vehicles is good for the planet. Perhaps you’ve even participated in Bike to Work Day or dreamed of getting an electric car to do your part.

But did you know that agriculture — specifically the breeding and raising of animals for food — contributes more to global warming than transportation?

And, of course, industrial-scale agriculture and especially animal-based agriculture is one of the planet’s heaviest users of transportation as well. Furthermore, animal agriculture is the leading cause of species extinction and ocean dead zones.

It makes sense then that the Intergovernmental Panel on Climate Change (IPCC) suggests reducing consumption of meat, milk, cheese, and butter as a critical way to reduce your carbon footprint.

For a compelling narrative on the links between industrialized animal agriculture and the climate crisis, watch this short video produced by Mercy for Animals, featuring Greta Thunberg, the young Swedish student who inspired a global movement to fight climate change, and who was named Time magazine’s Person of the Year for 2019:

Greta begins by noting that our relationship with nature is broken, but “relationships can change. The climate crisis, the ecological crisis, the health crisis — they are all interlinked.”

And the thing that links them all is how we raise animals for food.

How Can We Combat Climate Change While Continuing to Feed a Growing Population?

A report from the World Resources Institute says that shifting from a standard, animal-centric diet is one of the best places to start. Even changing just 30% of your food from animal products to plant-based foods would lead to meaningful improvements (though greater reductions would be even better!).

In 2018, the journal Science published the largest study to date on the environmental impact of food. It was an enormous and thorough study. Researchers looked at data collected from 40,000 farms in 119 countries, and studied the 40 food products that represent 90% of everything we eat.

The authors concluded that livestock provides only 18% of the food calories eaten by humans, and 37% of the protein, yet it uses over 83% of farmland. Meanwhile, livestock is also responsible for 57% of water pollution, 56% of air pollution, and uses a third of the world’s fresh water.

A 2018 article in Nature states that continued consumption of the Western diet (high in processed foods and red meats) could lead to “exceeding key planetary boundaries that define a safe operating space for humanity beyond which Earth’s vital ecosystems could become unstable.”

Or, put more starkly, in the words of Star Trek Lt. Commander Montgomery (“Scotty”) Scott, “I dunnae if she can take any more, Captain!”

And even though by “Western diet” they mean the standard American diet, most other developed and developing countries have increasingly adopted or aspired to this dietary pattern.

This has not only led to an increase in many preventable chronic diseases, but it has also widened the impact of environmental damage.

31-Day Food Revolution: Heal Your Body, Feel Great, and Transform Your World
31-Day Food Revolution is your guide to liberation from a toxic food world. Author Ocean Robbins reveals the secrets the industrialized food industry doesn't want you to know, how specific ingredients and methods could be making you sick -- and what to do about it. And he shows you how -- in just 31 days -- you can use the amazing power of delicious food to heal your gut, lose excess weight, and lower your risk for disease, all while contributing to a healthier planet.

Ocean Robbins was born in a log cabin built by his parents, and grew up eating food they grew on the land together. At age 16, he co-founded an organization called YES! (Youth for Environmental Sanity) that he directed for the next 20 years. Ocean has spoken in person to more than 200,000 people in schools, conferences and events, and he has organized 100+ seminars and gatherings for leaders from 65+ nations. Ocean’s work has taken him all over the world, where he has seen first-hand the powerful impact of the food we eat – not just on our health, but on people and economies everywhere. He is author of The Power of Partnership, and co-author, with his dad and colleague John Robbins, of Voices of the Food Revolution. He serves as an adjunct professor for Chapman University, and has received numerous awards including the national Jefferson Award for Outstanding Public Service. He serves as co-host and CEO of the Food Revolution Network.

Meditation for Addiction Recovery: How to Start

Discover the Art of Receiving and Improve All Your Relationships 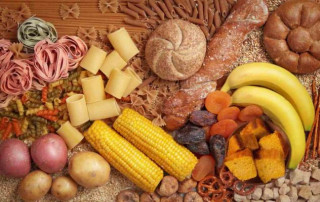 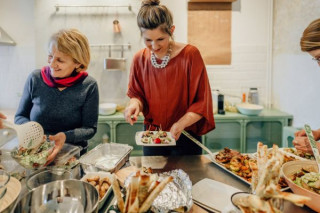 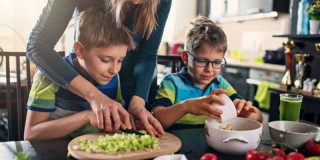 Plant-Based Families: How to Navigate Healthy Eating in a Household
Ocean Robbins 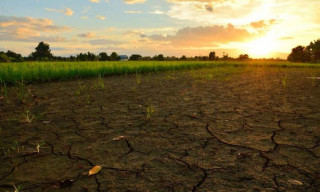 What You Eat Can Impact Climate Change! See 9 Foods That Harm the Planet and 11 Foods That Can Help Save It
Ocean Robbins 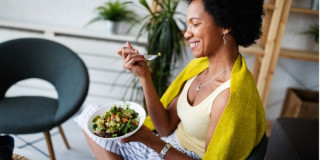 What B Vitamins Do You Need — And What Are The Best Vegan Sources of B Vitamins?
Ocean Robbins 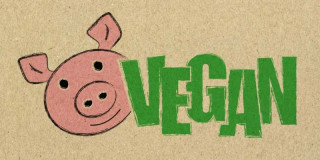 Vegan Bacon: Why It’s Better for You and How to Make Your Own
Ocean Robbins 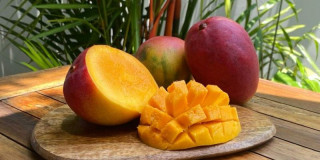 Are Mangoes Good for You — and the Planet?
Ocean Robbins 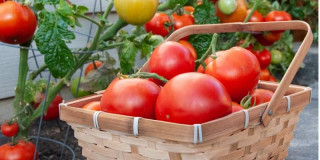 Are Tomatoes Good for You?
View all